by Bacao Rhythm and Steel Band 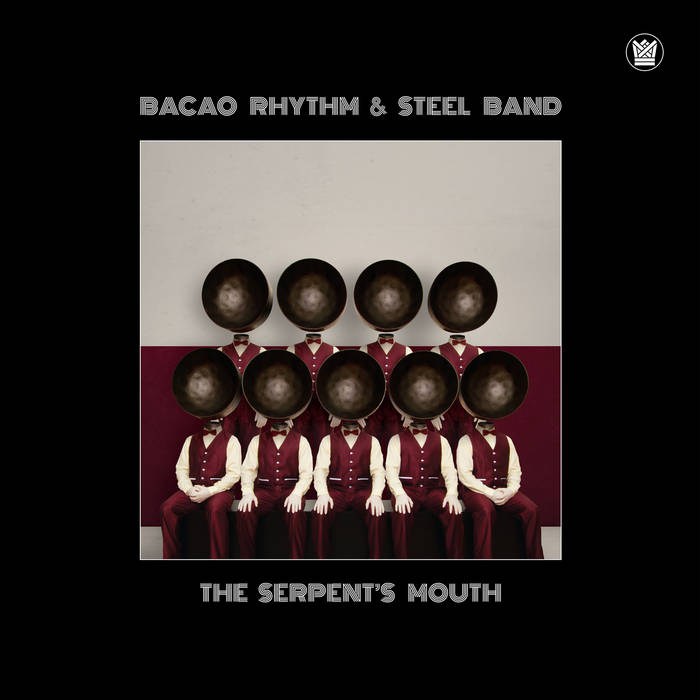 Following up on the massive worldwide success of their debut album 55, Bacao Rhythm & Steel band is back with another heavy duty offering. Picking up where they left off and incorporating a ton of new recording techniques they take a huge step forward with The Serpent’s Mouth. Named after the eight-mile strait between the island of Trinidad and the coast of Venezuela, The Serpent’s Mouth is a journey through both originals and covers, combining classic elements that wide-eared music fans already know, and mashing them up in new and unique ways.

Take “1 Thing” – on it, the group attacks the galloping, chopped Amerie smash hit, with singing pans that follow the R & B vocal. The sound is crisp and up-front, arguably more muscular than the 2005 original. On “Great To Be Here,” they take on the Jackson 5 B-Boy favorite (which stretches back to the Zulu Nation / Bronx block party days) – uncoincidentally, the original version featured a guitar lick that emulated a steel pan run. Here, it gets an even more pulsating groove, adding open-drums breaks throughout, to get DJs salivating. The group veers through more inventively-constructed covers as the album’s sequence continues, including Gang Starr’s “All For The Cash”; Mary J. Blige’s “I Love You”; and the recently unleashed first single, “XXplosive” and “Burn,” paying tribute to both Dr. Dre and Mobb Deep for a bi-coastal funk party. And, as band leader Bjorn Wagner states, “My favorite cover on the album is probably ‘Crockett Theme,’ which is the theme to ‘Miami Vice.’ I always loved the melody, and the cosmic vibe of the song, and I was honestly surprised that it worked without synthesizers.”

This time around the group’s originals are even stronger, as evidenced by cuts like the flute-fueled break-fest of “Hoola Hoop”; the slow and spacey “Touchdown”; and the album’s title track, the future-epic-adventure-movie-soundtrack cut “The Serpent’s Mouth.” Wagner explains, “I wrote the song with Bernhard Hummer as an instrumental fantasy story – think of pirates, smugglers and a dangerously beautiful sea passage towards the island. It became an allegory for our mind travels into the world of the steel pan.”

The Serpent’s Mouth is sure to please past fans and newly-minted ones alike. It seems like a new era for Steel Drum music is upon us, and Bacao is firmly leading the way into the hearts of music fans around the world. Another Big Crown Records Sureshot…

Bacao Rhythm & Steel Band, the mysterious steel pan outfit hailing from Hamburg, Germany have amassed a cult following around the globe. With a slew of classic 7”s and two critically acclaimed full length albums, they set a high bar for themselves, one they clearly intend on pushing even higher with this new offering, Expansions. ... more

Bandcamp Daily  your guide to the world of Bandcamp